Only 1 week left for this amazing sale! Hurry in to get yours today.

Posted by Royal Printing and Specialties at 10:49 AM 3 comments: 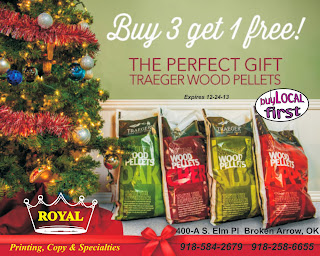 Posted by Royal Printing and Specialties at 9:55 AM 1 comment: 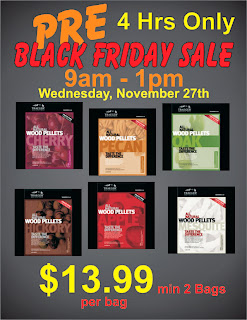 Posted by Royal Printing and Specialties at 8:15 AM 3 comments: 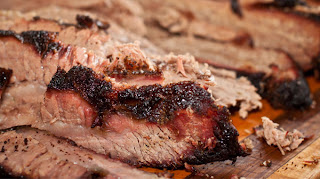 Mop sauce gets its name from the cotton mops old-time pit masters used to use to swab barbecuing meats with flavorful liquids. Mopping helps keep brisket moist during the long cook—especially important when working with a lean brisket flat. The spices in the mop sauce make it too grainy for spraying. If you don’t own a small barbecue mop, use a basting brush to dab the mop sauce on the meat. Be careful not to disturb the spicy crust. The meat should be the star here, but if you want, you can serve barbecue sauce on the side.

PREPARATION
Make the rub: Combine the salt, pepper, and chili powder in a small bowl and stir to mix. Season the brisket generously on both sides.

Make the mop sauce: Combine all the ingredients for the mop sauce in a nonreactive saucepan over medium heat. Bring to a simmer and stir until the salt dissolves. Rewarm before mopping the brisket so the fat (bacon grease, lard, or butter) liquefies.

Start the Traeger on Smoke with the lid open until the fire is established (4 to 5 minutes). Set the temperature to 225 degrees F and preheat, lid closed, for 10 to 15 minutes.

Put a wire cooling rack in a rimmed baking sheet or other shallow pan and place the brisket, fat-side up, on the cooling rack. After the first hour, mop the brisket with the mop sauce; continue to mop every hour for the first 4 hours.

Transfer the wrapped meat to an insulated cooler thickly lined with newspapers or bath towels. Let the meat rest for 1 hour, and up to 2. Reserve any juices that have accumulated in the baking sheet. Unwrap the brisket. Thinly slice across the grain using an electric knife or sharp carving knife. Shingle the slices of brisket on a platter and pour the pan juices on top.
Posted by Royal Printing and Specialties at 7:32 AM 5 comments:

TRAEGER PELLETS No Tricks ALL TREATS 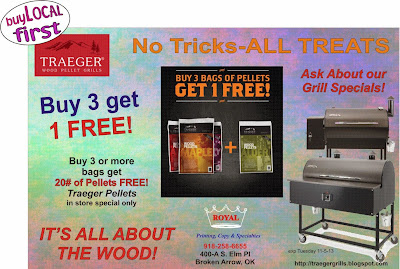 Posted by Royal Printing and Specialties at 9:04 AM No comments: 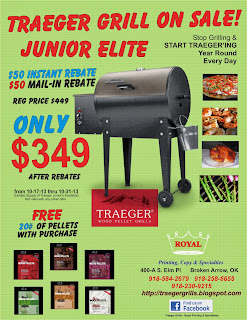 Posted by Royal Printing and Specialties at 9:57 AM 19 comments: 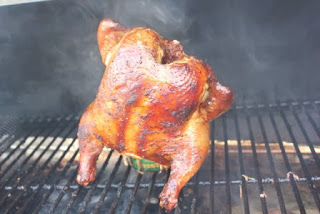 Gone are the days when the only can you could roast a chicken on was a beer can. Inspired by our Facebook followers who begged the question: "What else can I put in a chicken throne?" we offer you this awesome recipe for Asian Rubbed Chicken on a Ginger-Ale throne. This chicken is incredibly juicy. Slightly sweetened by the steam from the soda and mixed with the bold and slightly spicy flavors of our new Asian BBQ Rub, this is a chicken recipe to top the charts!

Rinse chicken in cold water and pat dry with paper towels. Cover the chicken all over with Traeger Asian BBA Rub; make sure to drop some in the inside too. Place in large bag or bowl and cover and refrigerate for 12 to 24 hours.

When ready to cook, set the Traeger to Smoke with the lid open until the fire is established (4 to 5 minutes). Preheat the grill to 375 degrees F with the lid closed for 10 to 15 minutes.

Open your can of ginger ale and take a few big gulps. Set the can of soda on a stable surface. Take the chicken out of the fridge and place the bird over top of the soda can. The base of the can and the two legs of the chicken should form a sort of tripod to hold the chicken upright.

Stand the chicken in the center of your hot grate and cook the chicken till the skin is golden brown and the internal temperature is about 170 F on a instant-read thermometer. Takes anywhere from 40 minutes to an hour.

De-throne that chicken and enjoy!!
Posted by Royal Printing and Specialties at 9:26 AM 5 comments: